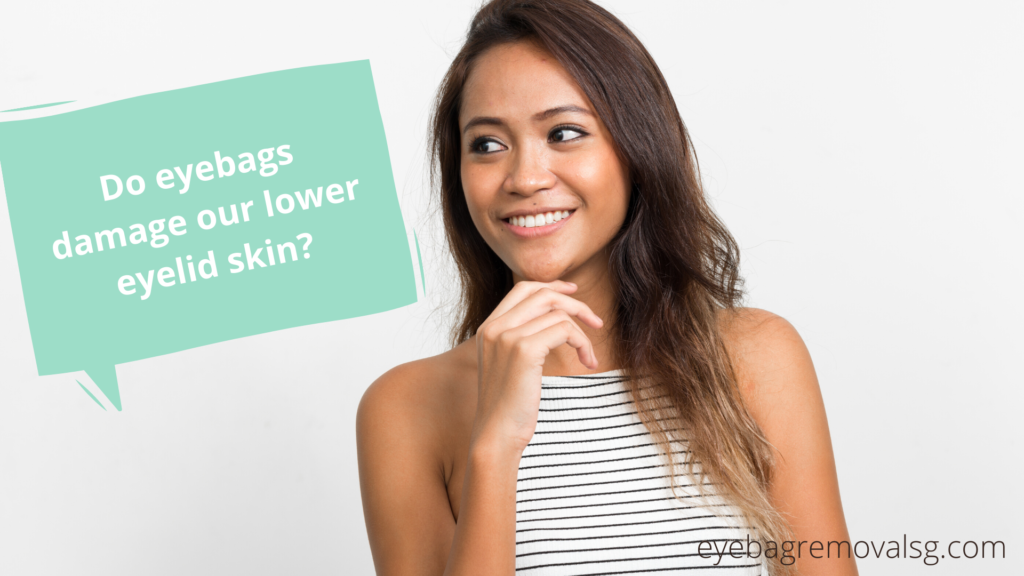 Before we address the topic of the lower eyelid skin, we need to know what really causes eyebags and whether we can actually prevent the occurrence of eye bags. The answer is unfortunately no. We inherit the ability to grow eyebags. It is not surprising to occasionally see a teenager with an eyebag, which should be prominent whereas most people in the early ’20s have perfect lower eyelid skin without bulges.

Once the eyebags have started to show themselves, it is initially more prominently seen especially during periods of water retention. This is usually the early eye bag appearance and patients claim that eyebags are better when they rest well. They do recur frequently until further growth of the eyebags now features prominently as a bulge in the lower eyelid.

Doctors with adept skill can remove this early bulge fairly easily. The older technique was to treat such eyebags by cutting on the external skin and removing the excess fat. This is now arcane and the newer methods remove them by an incision through the inner surface of the eyelid or the transconjunctival removal of eye bags, as they are known.

Once they are removed and the skin is of sufficiently good elasticity, it rebounds back and gives superior results of youthful-looking lower eyelids again. Unfortunately, this method is only suitable in the majority of patients below the age of mid to late thirties or younger.

The older person would first present with a bulge and later this becomes a herniation of the fat with slight stretch of the lower eyelid skin, giving rise to a prominent groove at the tear trough region. Simple removal might improve the result with some remnant laxity of the lower eyelid in some patients. This might still be acceptable in a minority of patients who just want to remove a tired appearance.

Any further growth might then start to stretch the lower eyelid skin with its attendant loss of elasticity and collagen with aging; it might then give rise to permanent lower eyelid elasticity or damage. It, therefore, makes sense to remove the eye bags in its infancy. Such a procedure typically takes less than 30 minutes in well-trained hands and the recovery is rapid within a couple of days.

Got questions? Ask away!